I am in heaven

There are few kitchen tools that are as simple, versatile and enduring as the classic dutch oven. And while we refer to them as “dutch ovens” or “casserole dishes” in America, there are very similar examples of this classic pot in many other cultures. This is a testament to the flexibility and utility that comes with using this classic pot.

The origins of the dutch oven come from the Netherlands (as you might expect from something with the word “dutch” in its name) during the 17th century. At the time, the most valued cookware was being made of expensive materials such as copper and brass. And the Dutch were some of the finest craftsmen of the day, supplying much of the world’s finest cookware.

But an English craftsman named Abraham Darby thought that he could do better. He believed that there was a market for less expensive cookware. The key to this was using cheaper materials such as cast iron. But this posed a challenge. The Dutch method of casting used sand molds to achieve a fine sheen to the finished material. The English methods at the time used molds made primarily of clay. Darby and his right-hand man, James Thomas, set out to find a way to cast iron using sand molds.

Their first attempts were failures as working with molten iron differed from the brass that they were used to using. But eventually, they succeeded in creating a method for casting iron in sand molds. This made the process cheaper and more efficient. And it allowed them to bring cheaper, more durable cookware to the market rapidly. 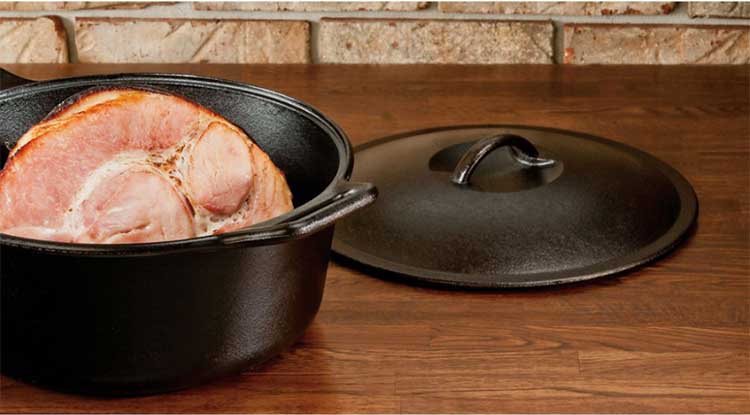 The dutch oven has always been a simple concept. At its simplest, the dutch oven is a covered pot. But it’s really much more than that. Its earliest uses were for cooking directly in open flames. This is why the pot needed to be so rugged. And it is also why the pot needed a well-fitted lid. Who wants embers and ash from a fire getting into their food?

Even today, variants of the dutch oven are a staple for campfire cooking. Referred to as a camping or cowboy dutch oven, the cast iron construction makes it ideal to withstand the rigors of cooking in an open-flame environment.

As the pot evolved, American style dutch ovens added small legs to the pot to elevate it a bit over the coals. And some pots used an attached, hinged lid to be sure that the topper stayed on to keep unwanted material out of the food being cooked.

Interestingly, dutch oven pots can actually be stacked upon one another while cooking. The bottom of one pot serves as the lid of the one below it. The heat is conserved and transmitted upward. There are examples of pots being stacked 5 or 6 pots high using this technique.

Recipes & Foods to be Cooked

The first thing we often think about when thinking about the uses of a dutch oven are things like stews or soups. And while the pot is perfectly suited for such creations, it sells the concept short to limit its usefulness to just liquid dishes. With a little creativity, the dutch oven can be used very similarly to a traditional oven to make baked goods such as breads and rolls.

A dutch oven is also very well-suited to cook, fry or braise meats. But with a little creativity, you can do even more. By placing wire racks inside the dutch oven, you can actually create two cooking regions that allow for some sophisticated cooking.

America’s Test Kitchen offers up its 6 Rules to Follow When Cooking with a Dutch Oven which include keeping your ingredients simple and cooking in stages to create the best results. 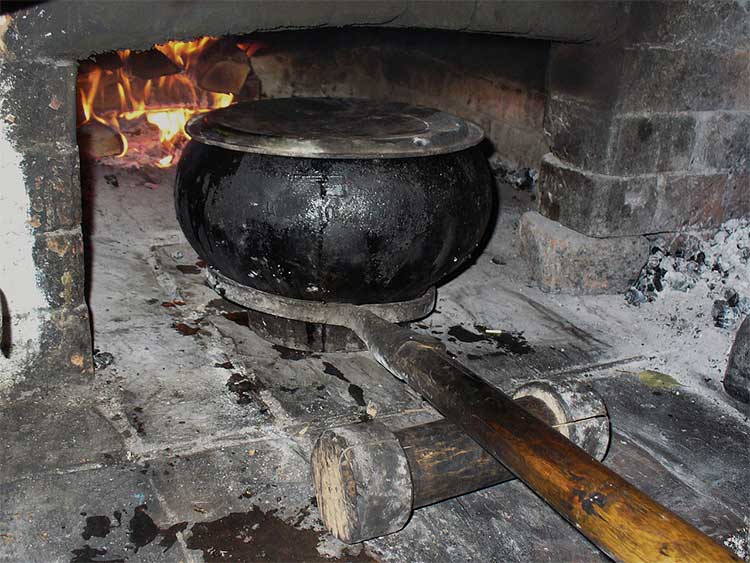 A traditional chugukok and the long-handled tool used to remove it from the hearth.

Dutch Ovens Around the World

As we mentioned, the dutch oven may be the most popular name for this simple covered pot, but the concept is found in many cultures around the globe.

For example, in Eastern Europe and Central Asia (mostly Russia), they use a pot called a chugunok. The chugunok is is a handle-less crock meant to be placed in an open flame cooking hearth. Because it has no handles, there is a special long-handled tool used to remove the pot from the coals. But in actual usage, it is virtually identical to what we know as a dutch oven.

In South Africa, the have something known as a potjie which translates to “little pot.” Again, it is used for cooking over open flame or coals just like a dutch oven.

In Australia, they use a pot that is similar to the cowboy or camping dutch ovens that they call a bedourie camp oven. The key difference here is that the bedourie is typically made of steel instead of the more traditional cast iron.

In Bulgaria, they use something called a Sač which is an iron or ceramic pot with a lid that is intended to be completely buried among the coals and ash for cooking all around.

Similar pots can be found all around Japan and the rest of Asia as well. Native Americans used similar pots in their cooking too. It’s just a great concept that was replicated around the world.

So what do they call it in the Netherlands? The Dutch refer to these pots as braadpan or sudderpan which translate to “roasting pan” or “simmer pan” respectively.

END_OF_DOCUMENT_TOKEN_TO_BE_REPLACED

Rev 1:14  His head and his hairs were white like wool, as white as snow

Rev 1:15  And his feet like unto fine brass, as if they burned in a furnace

Down To The River To Pray – Alison Krauss

Why I Hate Religion, But Love Jesus

Billy Graham – Why I am an optimist – Houston TX